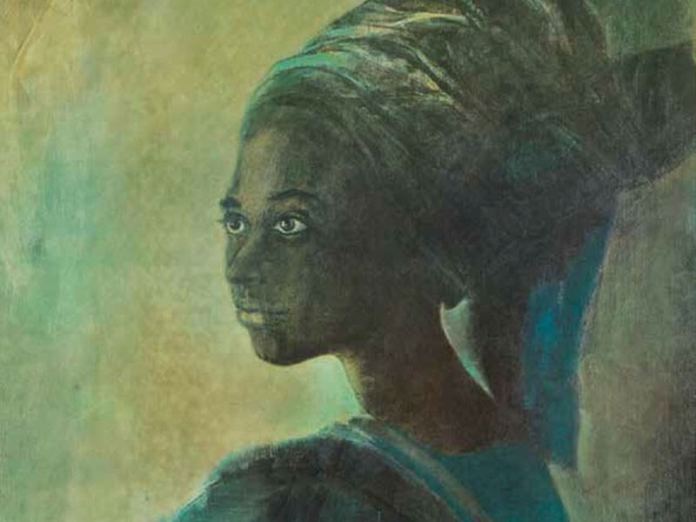 A long-lost Ben Enwonwu masterpiece, “Tutu”, re-emerges from the cold to set a new record as his first-ever work to sell for over a million pounds at an auction. Okechukwu Uwaezuoke reports

BONHAMS AFRICA NOW AUCTION
“Tutu” was clearly the auction’s star lot. Hence, its eventual sale for £1,205,000 (N520.2 million, €1.4 million, $1.7 million) at the Bonhams Africa Now: Modern & Contemporary Art sale in London, last Wednesday, should really surprise no keen devotee of African art. Its eye-popping price, a new record for the artist’s work at an auction, elicited a spontaneous applause from the Lagos audience. This was an audience that started keenly following the event real time from 6 pm at The Wheatbaker Hotel, which is discretely tucked away in the leafy upmarket neighbourhood, Ikoyi.

Even weeks before the event, aficionados had expected this Ben Enwonwu’s long-lost portrait of an Ife royal princess Adetutu Ademiluyi to emerge as the auction’s top seller. This was not without good reasons. First, it was estimated well above the other top sellers at £200,000-300,000 in the auction’s catalogue. Then, there was the groundswell of enthusiasm swirling around it, which would have been hard to ignore. Not many, in any case, would so easily disregard a work endorsed not only by the Booker Prize winning Nigerian novelist, Ben Okri, but also by myriads of serious collectors within and outside Nigeria.

The painting is a blue-themed portrait of a coffee-complexioned damsel, whose back is half-turned to the viewer. Obvious is the attempt by the artist to make her look regal in her traditional Yoruba attire. Of the damsel, Okri had written in the spring edition of Bonhams magazine: “The young woman [Enwonwu] met had extraordinary poise. She possessed an African beauty that combined serenity with an uncanny sense of self-worth.”

Enwonwu, aficionados believe, could have been enthralled by her straight narrow nose and thin lips, which are not the kind of features one would normally associate with the Negroid race. The artist, who was a Negritude movement proselyte (especially after his encounter with its key actors at the first Congress of Black Writers and Artists in Paris, held in 1958), was known for his idealisation of the African womanhood in his works.
“He asked her if he could paint her,” Okri continued. “She was taken aback by this unusual request. But being properly brought up, she replied that she would allow it if her parents gave their approval.

“That was not the response the artist was expecting. He was used to asking women if he could paint them, and on the whole they were delighted at the prospect. After all, he was one of the most famous artists of the continent…He duly sought out her parents. They were as surprised by the request as their daughter. They made inquiries, found that the artist was highly respected, and they gave their permission.”

This encounter took place sometime in 1973 while Enwonwu was on a visit to the revered Yoruba monarch’s palace. The outcome was the production of three versions of this portrait painting between that year and the following year. And since the artist never sold the originals of any of these three versions, it is not difficult to figure out why they have elicited so much interest among enthusiasts in the visual arts community.  Indeed, this painting reportedly never left the artist’s private collection until his passage in 1994. Even so, signed copies of this 1973 oil on canvas painting have found their way into many private collections in Nigeria. Consequently, the whereabouts of all the three original paintings hitherto remained officially a mystery until recently. This would explain the long publicised search for the painting, especially for the better known version done in 1973. The version that was sold at the Bonhams so far remains the only known original example of the oil on canvas painting. And thanks to the winning bidder, whose identity was expectedly not disclosed, a new auction record has been set for a Ben Enwonwu.

Neil Coventry, the Bonhams Nigeria’s representative, thinks “it is a well deserved price for a well renowned artist.”

Okri likened this “only authentic Tutu” to “some rare archaeological find”, which he also said was “a cause for celebration, a potentially transforming moment in the world of art.”

Bonhams Director of Modern African Art Giles Peppiatt called the painting “a national icon in Nigeria, and of huge cultural significance. It is very exciting to have discovered the only painting of the series that we now know still exists. Its appearance on the market is a momentous event and we expect it to generate enormous interest.”
That the painting was obviously of great personal significance to Enwonwu was understandable. But that it would later be seen as a symbol of national reconciliation for a post-conflict Nigeria was quite remarkable. For apparently, such symbolic fence-mending gestures, like an ethnic Igbo artist romanticising a Yoruba princess, could only be deemed a welcome distraction after the 30-month Nigeria civil war of the late 1960s and early 1970.

Meanwhile, Enwonwu’s other work Negritude-inspired water-colour and gouache work, “Female Form”, which was painted in the 1987, sold for £110,000 as the auction’s second best-selling lot. Closely trailing it was another similarly-inspired water-colour and gouache painting, “Negritude” (dated 1984), which sold at £100,000. Both paintings depict the idealised African woman in stylised serpentine forms.

Yusuf Grillo’s blue-themed oil on board “Evangelists: Cymbal, Triangle and Tambourine” – also publicised weeks before the auction – came a distant fourth among the top-sellers at £56, 250. The work, dated 1964, was trailed by El Anatsui’s 13-piece wood carvings, which was titled “At the Ancestors’ Conference” and sold for £47, 500.
It was expected that works by such African artistic luminaries as Kolade Oshinowo (who recently turned 70), Ghanaian-born Ablade Glover, Ben Osawe, Ladi Kwali, Akinola Lasekan, Ghanaian-born Amon Kotei, Bruce Onobrakpeya, Uche Okeke, Simon Okeke, Congolese-born Chéri Samba, Twins Seven-Seven, Sokari Douglas-Camp, Emanuel Ekong Ekefrey, Abiodun Olaku, Reuben Ugbine, Nnenna Okore and Victor Ehikhamenor would feature at an auction that preens itself on being “the only sale of its kind globally”.

Obviously, the auction house sees this collection a “tremendous potential for investment”. This should explain why it scours the entire continent in search of the very best of its post-war and contemporary art.

Strength and Perseverance in An Abundance of Scorpions