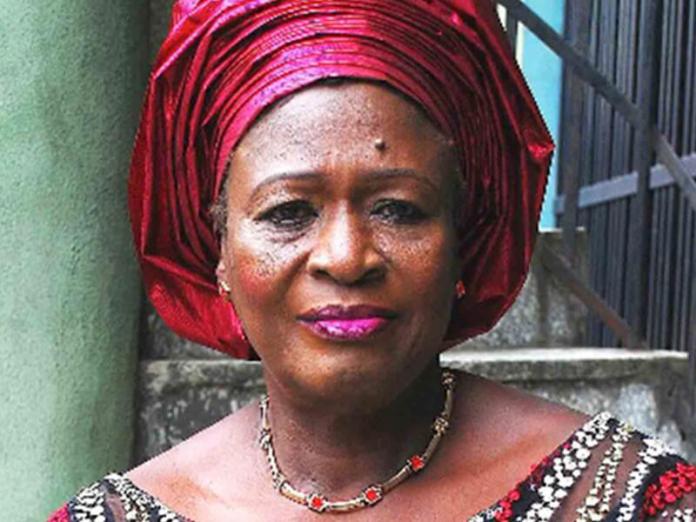 Can we have an insight into your background?
I was born on February 28, 1948 into the Ebiti family of Lagos. My mother was a petty trader and my father was a railway worker. He later got transferred to Kafanchan in the then Northern Nigerian where I had my early childhood. I began my education at Baptist School Kafancha. I was a Moslem but got interested in the Baptist songs and on Saturdays I used to attend Sunday School review to learn some of the songs and also took part in choir practice. My father was an Imam but was very liberal and never objected. I can say that among all my siblings I am the only odd one. I used go to church on Sundays as well and was attending Baptismal classes. Unfortunately for me, on the day I wanted to be baptized, when it got to my turn one of the teachers said ‘Is this not Mopelola, daughter of Mr. Ebiti the Imam?” He refused to baptize me. I cried home that day and when I got home everybody was making jest of me. This shows the kind of Nigeria I grew up in. There was religion tolerance.

What reminisces do hold dear at 70?
I feel delighted. A lot of people don’t even believe that I am 70. It is the grace of God. I trained as a nurse but I attribute everything to God Almighty. I don’t have any special food that I eat. I eat anything and everything in moderation. People talk about longevity but it is by His grace because my mother died at 51 and my father died at 72. Growing up in the North was interesting we (the Igbos and Yorubas) lived in Sabongari Area. And living among different ethnic groups gives you the opportunity to speak different languages and your own mother tongue. I have been longing to go to Kafanchan where I grew up but I am concerned about security issues. There is hostility everywhere. I pray that this great country will go back to the old days of ethnic and religious tolerance.

Looking back, are there things you would have done differently?
I don’t think there is anything because nobody has ever prevented me from doing what I wanted to do. I remember when I came back from the North and enrolled for a secondary school in Abeokuta, I used to spend my holidays with my uncle. He was surprised that I exhibited a lot of freedom to the extent of attending church being an Imam’s daughter. He didn’t scold me he just got an Imam to teach me the Quran and all that.

What were the factors that shaped you?
My mother relocated to Lagos at a point and I lived with my step-mums back in Kafanchan. Honestly, the communal living really helped me in my adult life. You wouldn’t differentiate between the children from the different mothers. We ate from the same pot. There was love and we shared everything. For instance, one of my brothers, Alhaji Rafiu Ebiti is one in a million. Generous, loving, kind and accommodating. He doesn’t hide his love and affection for me. He organized the surprise 70th birthday for me and came with his family. We watch each other’s back and this strengthens the family.

How would you say parental influence has helped you to become who you are today?
My father was a disciplinarian, accommodating and tolerant. He was a man who kept to his rules. If you derail from the laid down rules, you will get a stroke of the cane just to sharpen you up. An incident happened that I would never forget. There was a time we wanted to go Kagoro, a town very close to Kafanchan. We had teachers from that school coming to teach us and we had prepared and I was excited. We had to trek about seven miles to this town because there was no vehicle in those days. My friends came and we were about leaving. Then my father came out and said I couldn’t go. Of course, I had to stay back but it was very painful.

You mean being a girl-child didn’t have an impact on you in terms of education in those days?
My father was a believer in education and he ensured that he trained all his children. I remember he used to say that even if he had only one trousers left on him, he must educate his children whether boy or girl. So gender wasn’t an issue because he was educated and enlightened and there was no discrimination whatsoever.

What was your childhood aspiration?
I had always wanted to be a nurse. After my primary education I moved to Abeokuta for my secondary education. I later enrolled at School of Nursing, Lagos State University Teaching Hospital. Honestly, it was the uniform that first enticed me into the nursing profession. I remember in Kafancha there was a young lady working in a general hospital. A street separated our house from the general hospital and I used to see a lot of nurses going into the hospital and I aspired to be like them. Some rode on bicycles and I got attracted. By the time I got into it, it was a different ball game and found that nursing was beyond the fancy white apparel. In fact, I wanted to leave or would have left. In fact, some of my mates left and I was also contemplating leaving my nursing training for teaching. I actually went for an interview to study French and English at Ahmadu Bello University, Zaria. My father was still in Zaria then and I used to go on holidays. I was recommended for admission but the then Commissioner of Education waded in and persuaded me that teaching is good but the country needed more nurses. He advised me to go back to Nursing. I went back and continued the four year programme and graduated. I got married to my husband, Dr. Ayo Ojo, an indigene of Ilara-Mokin, Ondo State and a medical doctor. I later went back for my midwifery, did a family planning programme. I worked at LUTH briefly and joined my husband in his hospital where I worked for many years before I retired.

What lesson has life taught you?
Life has taught me to take things as they come because there are things that are beyond you. I take each day as it comes. I am very comfortable with what I have achieved. I am easily contented. I don’t have any regrets. Life has been good to me. I have a loving family, surrounded by wonderful children and a loving and kind man.

Safemasters Gets a Crown for Fire Prevention Tips