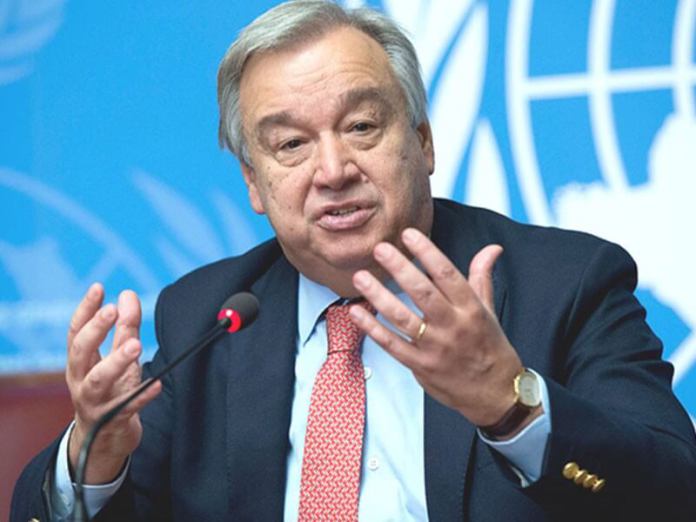 The United Nations at the weekend demanded for the arrest and prosecution of the perpetrators of the attack Thursday night on Rann town in Borno State, which killed aid workers and security operatives.

In a statement issued Friday night from the UN headquarters in New York, Secretary-General António Guterres made the demand for the arrest and prosecution of the assailants.

The statement signed by spokesman for the Secretary-General, Stéphane Dujarric, said all humanitarian personnel had been evacuated from Rann, a town in Kala-Balge Local Government Area.

No group has claimed responsibility for the attack that took place at a military barracks in Rann, which the UN said resulted in the death of three aid workers and eight Nigerian security personnel. But it bore all the hallmarks of assault by the Islamic terrorist sect, Boko Haram, which has since 2009 launched a terror campaign against the Nigeria state.

“The Secretary-General expresses his deepest condolences to the affected aid workers, their families and to the government and people of Nigeria. He wishes those injured a swift recovery. The Secretary-General recalls that attacks targeting civilians and civilian infrastructure violate international humanitarian law. Those responsible for these and other atrocities in Nigeria must be apprehended and prosecuted.

“The Secretary-General calls on all the parties to ensure at all times the protection of all civilians in Nigeria.”

Head of Communications, United Nations Office for Humanitarian Affairs, Samantha Newport, told THISDAY that the suspension of humanitarian services was to allow for proper study of the situation.

She maintained, “The suspension will have minimal impact, it will allow the UN to make assessment on what happened on security…

The medical charity Medecins Sans Frontieres – also called Doctors Without Borders – said on Friday it had also suspended its medical activities in Rann and evacuated its national and international staff.

MSF said in a statement, “Following a violent attack in Rann, Borno Dtate, on Thursday 1 March, Médecins Sans Frontières suspended its medical activities in the town and evacuated 22 national and international staff.”

Many international organisations, including International Organisation for Migration and UN Children’s Fund, have deplored the attack on Rann.

“Two of those killed were IOM field colleagues.”

Abdiker added, in the “We are outraged and saddened at the killings of two of our colleagues in an attack by Boko Haram in North-east Nigeria last evening.

“They represented the best in us in assisting displaced civilians. We will miss them.”

The UN migration agency said some 55,000 people displaced by the Boko Haram insurgency lived in a camp near the military base, where the terror attack took place.

UNICEF, in a statement by its Regional Director for West and Central Africa, Marie-Pierre Poirier, said, “UNICEF is shocked by the attack on March 1, in Rann, Borno State, in which three aid workers lost their lives, three were injured and one is reportedly missing.

“One of these brave workers who lost their lives, and the nurse who is missing, were on the frontline providing critical services supported by UNICEF.”

Meanwhile, the main opposition Peoples Democratic Party has condemned the murderous assault on Rann. However, PDP said the President Muhammadu Buhari government should be held liable for the deaths. The party called for an independent investigation into alleged compromise of security in flashpoints and alleged release of some arrested insurgents by agents of the federal government. PDP said such inordinate releases were generally believed to have contributed to the increase in violent attacks in the North-east.

On February 19, 110 schoolgirls were kidnapped by Boko Haram from Government Girls Science and Technical College, Dapchi, Yobe State, in the most audacious abduction by the group after the 2014 kidnapping of 276 schoolgirls from Government Secondary School, Chibok, in Borno State. Of the 276 girls snatched from the school on April 14, 2014, 57 escaped, four were found, 103 were released, and 112 are still missing.

The authorities had claimed that some of the Dapchi girls were rescued, but that turned out to be untrue.

PDP, in a statement by its national publicity secretary, Kola Ologbondiyan, said, “We urge the international community to compel the Buhari Presidency to come out with the truth on the alleged compromising of security in flashpoints as was reported in the sudden withdrawal of troops from Dapchi, Yobe State, just before the abduction of our 110 daughters.

“The withdrawal of troops before the horrendous abduction has raised all manners of speculation and provided room for conspiracy theorists to thrive. “Nigerians have become weary, despondent and disappointed as insurgents, murderers and marauders rove our land while the Buhari Presidency engaged in cosmetic reactions.

“We ask: what was the actual security situation in Rann and what was the information available to the community before the attack?

“What has the federal government to say to the allegations that it released some arrested terrorists as well as allegations that monies were even paid by government agents to terrorist groups as ransom in controversial swap deals? These developments are being alleged to have emboldened acts of terrorism in the country.”

Speaker of the House of Representatives Yakubu Dogara also condemned the Rann attack. In a statement by his special adviser on media, Hassan Turaki, Dogara said, “It is saddening that people who have been sacrificing to save lives, and offer succour to our people in the North-east are now targets of blood thirsty terrorists.

“We condemn this in the strongest terms as it is against all rules of engagement in conflict zones all over the world and appeal to all humanitarian agencies not to be deterred by this new dimension of violence by the insurgents.

“In The security agencies should also provide adequate protection and coverage to humanitarian workers in the region.”