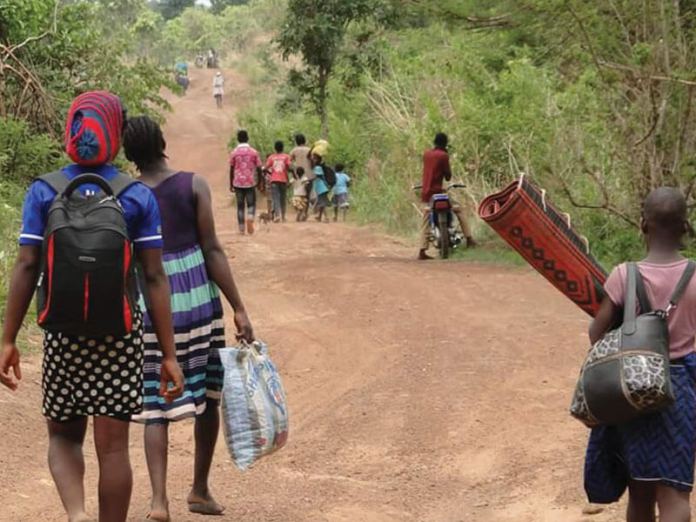 The killing of Reverend Father Joseph Gor and his visiting friend and priest, Father Felix Tyolaha, amongst other worshippers by marauding herdsmen last Tuesday at a requiem mass for a member of the community, who passed on, at the Saint Ignatius Catholic Church is the height of the series of attacks on Benue State, a situation that bears unsavoury signs for the security of the nation, reports George Oko

By the time the assailants left, both Fathers Gor and Tyolaha including 17 other parishioners were not as lucky as the heavy rain of bullets pierced through their bodies leaving them completely lifeless. Eyewitnesses recalled that both of them were preaching right at the altar, when they were shot dead. The assailants did not however stop at the killing of those in the church but went further to attack, chase and burn down the entire settlement.

Some of the villagers, who as a result of the sporadic gun shots, sprinted out of confusion to nearby bush, later regrouped to chase the invaders but their efforts were in vain as they had no weapons for self-defence.

A member of the community, Terver Chia, said the church usually has its morning mass by 5.30 am and that on the day, apart from the mass, a burial programme was ongoing.

“I was not at the church but I had woken up to prepare for the farm. I was hearing songs from the church as my house is just a stone throw from it when suddenly the songs were interrupted by sporadic gunshots amid shouting. Initially, many of us wanted to run towards the church but we saw our people running towards us telling us to run that the Fulani herdsmen were after them.”

Chia, who said he lost very close relatives to the church attack lamented why the assailants would kill innocent priests and worshipers.
“Fr. Gor is God-sent to us,” he said, wondering why anyone would cut short a life solely dedicated to the service of God. He wept.
A few months ago, Fr Gor and Tyolaha were posted to another outstation of the Catholic denomination in Daudu, Guma Local Government area where the suspected herdsmen had also attacked the community he was residing on two different occasions.
Before the last attack that led to his untimely death, he posted on his Facebook page, alerting that the herdsmen had invaded Mbalom and were brandishing deadly weapons. He also warned that they were in danger and living in fear.

His friend and Superior General of the Via Christi Society, Father Theophilos Hwande, writes in the pain of his passing: “How do I begin? The pain is beyond compare. Fr. Joseph Gor was my classmate at Mt. St. Gabriel Secondary School from 1990 to 1996. We sat on the same seat given that his surname started with G and mine was H.

Hwande paid tributes to the late priests amidst sobs, “My joy was full when he was ordained a priest five years after I was ordained. He was a sign of doggedness. In 2017, I went to Mbalom and spent ten days with him. They were the most exciting days of life. He saw me as a friend, brother and classmate, not as a superior or some sort of authority.

“On December 31, 2017, Fr. Joe Gor joined me in my parish along my other mates of Set ‘96 to thank God for his goodness. He preached at the mass after which we all went to Adaka for our set’s Mimi and born-fire barbecue dinner.

“Today, the satanic killer-herdsmen have cut short his very beautiful life. On 4th June 2016, I mounted the pulpit to preach at the first thanksgiving mass of Fr. Felix Tyolaha at Ikpayongo, because he was the first priest to be ordained from my home parish for the Via Christi during the time of my service as the Superior General of the Via Christi Society. This is a brother and priest and kin.
“In January, Fr. Tyolaha called to tell me that his Parish, Yogbo was under attack by herdsmen. I instructed him to move to Daudu, where he was staying till the Bishop asked if I could release him to cover for Fr. Joe Gor in Ukpo, Ayar Mbalom, who was going on training. How could a man run from the herdsmen only to be killed by them?

“May the souls of my brothers, Fr. Joe Gor and Fr. Felix Tyolaha, rest with their master in peace as they were both killed in their full vestments at mass. They will sure complete the mass they began here in heaven.”
The Makurdi Diocese of the Catholic Church had confirmed the killing of two of its priest by the herdsmen. Director of Communication of the Diocese, Fr. Moses Iorapuu, said the two priests had been confirmed dead in a deadly attack by herdsmen/Jihadists early Tuesday in Ayar Mbalom village and St. Ignatius Quasi Parish Ukpor-Mbalom.

According to him, they burnt down homes, destroyed food items and killed at will, in their typical style.
“The police seem to know nothing of the attacks, which have been going on in other villages within Benue State since the Anti-open Grazing Law came into effect last year,” he said, adding that many people had been querying the silence of the International community over the massacre of Benue citizens.

He added, “The answer is simple: It has been the goal of the Jihadists to conquer Benue and Tiv people, who resisted their advance into the middle belt and the Eastern part of Nigeria since 1804, the people who rejected Islam and fought for the unification of Nigeria in the civil war of 1967-1970.”

He said the people of Eastern Nigeria do not have sympathy for Benue people, who fought on the side of Nigeria, adding that the Muslim North as a result has been enjoying a sweet revenge overshadowed by an insensitive regime.
The director of communication disclosed that there were over 170,000 internally displaced persons before the Naka invasion and that with the current situation in Mbalom, Benue would be flooded with thousands more.

“What cannot be said at this point is the consequences of the death of Missionaries on the silent killings that have been ignored by the government for over a year…To go for the Priests means total destruction of everything we stand for and believe in as a people,” he said.

The Police Commissioner in the state, Fatai Owoseni, said the police were informed of the attack by 8am. He said, “After doing a wider coverage of the general area, we also went to the church where this incident happened. That was where we were told on the spot that these attackers came by 5am, went into the church and to the venue of a burial that was going on where the priest was supposed to officiate.

“We will intensify our search to go after these people wherever they may hide. We will also work on the information from the members of public there, because we believe that they must have been hanging around the place to have committed that act at 5am. So, we still believe that they would be somewhere around there. These are armed marauders, who are going about killing people and we will go after them with all the resources we have.”

Also, the Deputy Governor of the state, Benson Abounu, said “it was another black day in Benue. I am saddened, the governor who is on leave is saddened and Benue people are very sad, because I can put it now that Benue is under is under siege.

“We have been attacked from all corners and this is unacceptable. What happened today is a calculated attack, well planned, and well executed. They must have taken their time and they hit their target and they got what they desired to.
“The police have been able to recover 16 corpses one had earlier on been brought to Makurdi and as I talk to you now, all the corpses have been brought to Makurdi including the two Reverend Fathers killed right inside the church. That is a new dimension of attacks, because it has never happened before and therefore is very worrying.”

Governor Ortom said the killing of people who have made sacrifices of their lives to preach peace and love of mankind was unwarranted and unacceptable. He called on the people of the state to be prepared to defend themselves and their land, because the state was under siege and that they have no other place to run to.

He appealed to the people of the state to support the security agencies to surmount the challenges, noting that it was clear that they have been overwhelmed. He also expressed appreciation to the President, Muhammadu Buhari for condemning the killings and urged him to direct the arrest of the perpetrators of what he described as an ongoing pogrom in the state.

The governor also called on the All Progressives Congress (APC)-led federal government to change the way of doing things in the country by ensuring that the killings in all parts of the nation are stopped, vowing that no amount of killings would make the state review the Open Grazing Prohibition and Ranches Establishment Law, because it was the product of the entire people and that ranching was the only solution to the incessant farmers and herders’ crisis.

Other prominent Benue indigenes also condemned the killings. They include a former President of the Senate, David Mark; former governor of the state, Senator George Akume and his successor, Dr. Gabriel Suswam as well as the National President of the Nigerian Catholic Diocesan Priests, Rev. Father Sylvester Onmoke.