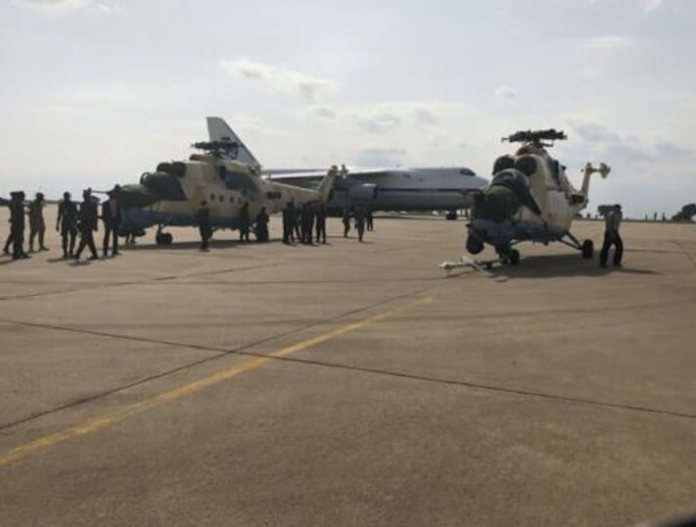 The Nigerian Air Force (NAF) Monday took delivery of two Mi-35M combat helicopters from Russia, in a bid to combat the insurgency in the North-east and the rising wave of killings in other parts of the country.

The helicopters were delivered to the air force at the Tactical Air Command, Makurdi in Benue State.

According to NAF Director of Public Relations and Information, Air Vice Marshal Olatokunbo Adesanya, “The Nigerian Air Force (NAF) took delivery of two Mi-35M helicopter gunships that the federal government had since ordered from Russia.

“The Antonov aircraft, which brought the new Mi-35M helicopters, touched down on the runway at the NAF Base, Makurdi, at exactly 12.20pm today (yesterday).”

While taking custody of the fighter helicopters, Olabisi said that the newly acquired aircraft would in a few days time be assembled and taken to Kaduna where they will be officially inducted as part of the 54th NAF Day celebrations and thereafter be deployed in conflict zones.

According to him, NAF was aware of the prevailing security situation in the country and the effort the federal government was making to ensure that every part of Nigeria is safe and secured.

“It is part of this concerted effort that the NAF is taking delivery of a second batch of two MI35M combat helicopters from Russia.

“The helicopters in a few days from now will be assembled. We are happy that we have a team of Russian engineers who are going to assist in the reassembling of these helicopters.

“Thereafter, they would be taken to Kaduna where they will be officially inducted as part of the 54th NAF Day celebrations. Thereafter, the helicopters will be deployed in conflict zones,” he said.

He expressed optimism that the new addition to the NAF fleet would go a long way in boasting the security situation in the country as well as enhance the NAF’s operational capacity.

He said the helicopters will be deployed in places like Benue and other states were insurgents and criminals are terrorising innocent people.

“What is happening in Benue is regrettable and the situation here is of concern to most of us. I believe that the strategic planners also has Benue State as one of the areas where these helicopters are likely to be deployed,” he stated.

In his remarks, Adesanya noted that the Mi-35M combat helicopters are one of the most sophisticated aircraft in the Mi-35 gunships category, with a unique feature for night fighting.

According o him, “I believe with the coming of these helicopters will go a long way in enhancing the security of the nation and enhance NAF’s operational capacity and it will go a long way to ameliorate the situation in the country.

“They are two of them coming now. We took delivery of two in December 2016. Those two are already deployed for operations and we have seen them recording a lot progress in the counter insurgency fight in the North-east.

“These two that have been received today are also going to be assembled, after which they will be test-flown and once they are test flown, they will be inducted in Kaduna.”

Adesanya also stated that a combined team of NAF personnel and Russian technicians were also on hand to assist in offloading the partially assembled new helicopters, some parts of which came in crates, adding that the personnel of the Nigerian Air Force had already undergone training in Russia as pilots and technicians on the new Mi-35 aircraft as part of the contract.