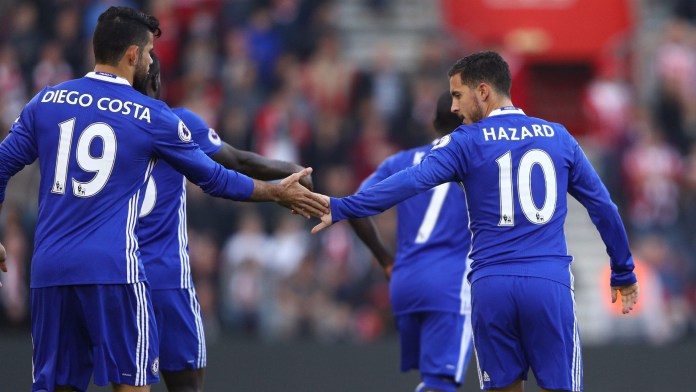 *Conte goes head-to-head with Valverde to survive been ‘chopped’

Antonio Conte has said he will consult his players ahead of Chelsea´s Champions League clash with Barcelona on Wednesday and after the game he might do better to seek out Ernesto Valverde.

Both coaches faced chaotic starting points this season but only Valverde heads into this last 16 second leg at the Camp Nou with his domestic campaign still very much intact.

Each began the campaign at the end of a frenzied summer, in which key players were sold, less wanted ones bought and with the feeling overall of a squad weakened rather than bolstered.

Asked in September to reflect on the club´s transfer dealings, Conte said: “This question is very difficult to answer. I think we have to wait until the end of the season and then we’ll see.”

Valverde was even less diplomatic. “The best thing about this window is that it is now closed,” he said.

Each had unexpectedly found a gaping hole in attack as Neymar was lured by Paris Saint-Germain while Conte was only too happy to let Diego Costa leave, but then watched Manchester United walk off with Romelu Lukaku, the intended replacement.

Barcelona bought Ousmane Dembele, the club´s most expensive signing, who limped off 55 minutes into his debut and would not return until January.

Chelsea, meanwhile, plumped for Alvaro Morata, who lacked confidence and gumption, and then in January Olivier Giroud, who had already been failing to get into the Arsenal team.

And the ones brought in. Ross Barkley, Tiemoue Bakayoko and Antonio Rudiger, for Chelsea. Paulinho and Gerard Deulofeu, on a buy-back agreement, for Barcelona.

But, eight months on, and with the season’s end now in sight, one coach allowed the frustration to fester and deepen, while the other has ensured it is all-but forgotten.

Barcelona sit eight points clear at the top of La Liga, and are unbeaten after 28 games. Chelsea are fifth, four points adrift of the Champions League qualification spots, and perhaps need to win the tournament to play in it again next season.

The Blues could certainly beat Barca – they were unfortunate only to come away from the first leg with a 1-1 draw – or still sneak into the Premier League´s top four.

But they are 25 points behind Manchester City and their miserable title defence is likely to mean Conte departs in May.

What Conte has complicated, Valverde has simplified. Barcelona have become more functional this season, playing 4-4-2 as well as 4-3-3, and tighter at the back. They have conceded only one more league goal than the miserly Atletico Madrid.

When Valverde was asked about the possibility of Neymar returning last week, he typically brushed it off with minimal fuss. “It is a fantasy and we will not talk about speculation we know would not end here,” he said.

And he has kept Messi happy, the Argentinian arriving this week with five goals in his last four games, including the crucial winner against Atletico Madrid.

Conte, meanwhile, is yet to find a solution to his striking problems, has given oxygen to his conflict with the club´s hierarchy and has succeeded only in alienating his own best player, Eden Hazard, who is disillusioned with a lone role up front.

After Barcelona edged out Atletico 1-0 earlier this month, Diego Simeone said Messi was the decisive factor but also had paid tribute to Valverde´s calm and calculated Barca revival.

“It makes me happy to see a Barca so tight and strong defensively,” Simeone said. “What Valverde is doing is wonderful. He has reinvented them.”

They hope to have Andres Iniesta available again after the midfielder trained on Monday, following a hamstring strain.

On Chelsea, Valverde said: “They are very strong and defend very close together. We have a lot of hope and all is still to play for.”