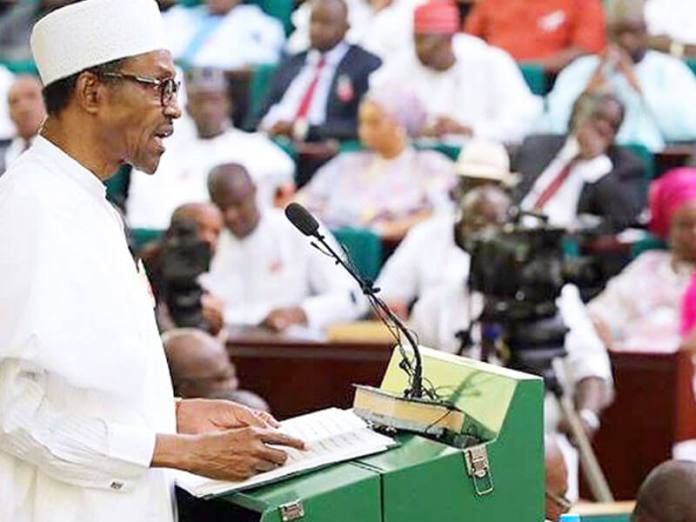 Buhari presenting the 2017 budget to the National Assembly

Governors on the platform of the Peoples Democratic Party (PDP) and some All Progressives Congress (APC) governors have quietly thrown their weight behind the move by the National Assembly to override President Muhammadu Buhari’s veto on the Electoral (Amendment) Bill, 2018, which is proposing, among others, to alter the sequence of elections in the country.

A highly placed source in the National Assembly who said he had spoken to many of the governors, especially those seeking a second term in office, have given their tactical support surreptitiously to the amendment of the Electoral Act.

Buhari recently vetoed the Electoral Amendment Bill on the grounds that the section that is proposing to alter the election sequence for the presidential elections to hold last would infringe on the powers of the Independent National Electoral Commission (INEC) to organise and supervise elections in the country.
However, the National Assembly has vowed to override the president’s veto, with lobby intensifying by the day among pro- and anti-Buhari legislators to vote for or against the bill, amid allegations of offers of inducements by the executive arm of government to kill the bill.

The National Assembly can override a presidential veto if two-thirds of its members in both chambers vote for the bill to become law.
The source, who spoke in confidence on the backing of several state governors, said many of them are concerned that the president might work against them once his election has been held first, hence their preference for the amendment to the Electoral Act.

He said many governors have been quietly urging their lawmakers in the National Assembly to accelerate the process of overriding the president’s veto.
Other governors, it was gathered, are eager to see the amendment passed.
However, it is still not certain if the amendment will scale through in both chambers of the federal legislature, as a senator who spoke to THISDAY on the condition of anonymity, said he was confident that the amendment would pass easily at the Senate, but may hit a brick wall in the House of Representatives.

“The House of Representatives is likely to be the stumbling block, but if many of them realise that their return to the House may depend on the bill, they would not hesitate to override the president’s veto,” the senator said.
He also revealed that last week’s reconciliatory meeting by the leadership of the APC with its Senate Caucus to avert the planned override vote of the president’s veto has failed, as senators have started to append their signatures in register to vote in favour of the passage of the bill.

Senators from the opposition PDP are all in favour of overriding the veto, THISDAY gathered.
He explained that the pro-Buhari group has been operating under the assumption that it has about 40 senators on their side, but most of them are actually prepared to vote to override the president insofar as electronic voting is used on the day the voting takes place so that their identities can be concealed.

He also claimed that some PDP senators who have “deceptively” committed not to override the veto were only playing along in order to partake in the “largesse” being promised by the executive not to upturn the president’s veto.
“Of course, they (pro-Buhari group) will say they are more than that. But many are being blackmailed into doing so and are being promised cash. But they will vote pro-amendment at the end of the day.
“The pro-Buhari group is finding it hard to win people to their side, because our people know there is nothing special to be gained from fighting for the president. Chief John Oyegun (national chairman of the APC) cannot guarantee anything,” he said.

THISDAY also gathered that the lawmakers in both chambers are unhappy with Oyegun for having watched while the executive explored every opportunity to rubbish the legislature.
“This caucus is one of the most important blocs in the party, but that was the second time he has met with us since June 2015. The first time, he promised to resolve all the issues with the executive, but he did not. So there is nothing he can say now that we would believe he can deliver,” another senator said.
It was learnt that senators in favour of overriding the veto on the bill held a meeting at the weekend in Lagos, after attending the wedding of the daughter of business mogul, Aliko Dangote, where they assessed their plan.

The meeting also had in attendance some legal experts who scrutinised the Constitution on the planned override.
On the basis of the Lagos meeting and the counsel they got from the lawyers, the confidence among legislators set to override the president’s veto got a boost based on the interpretation of the two-thirds majority required to pass the Electoral Amendment Bill into law.

According to sources privy to the meeting, the general impression is that two-thirds of 109 senators and 360 members of the House will be required to vote in favour of overriding the veto.
However, the sources informed THISDAY that this interpretation of the Constitution was wrong, as what is required to override a presidential veto is for two-thirds of the members present at plenary to vote in favour of a bill’s passage.

Accordingly, lawmakers who are in favour of overriding the president are banking on the interpretation of certain sections of the Constitution, which specifically qualifies the two-third (or four-fifth in some cases) votes requirement.

While some sections in the Constitution are categorical about the participation of all members, others are silent on it, a loophole which the lawmakers are now seeking to explore.
The section that deals with presidential override is not specific on the two-third votes required.
A lawmaker, who explained the interpretation of what the majority requirement is, said the Constitution is very clear on the issue.

Section 58, (5) states: “Where the President withholds his assent and the bill is again passed by each House by two-thirds majority, the bill shall become law and the assent of the president shall not be required.”
Continuing, the lawmakers explained: “When passing a law, it says two-thirds majority of each House, meaning those present, since it did not say “ALL” members as is the case with other sections of the Constitution.
“It is just the way we normally pass laws on the floor, it is of those present, we do not count first to be sure everyone is present, so passing or overriding the veto on this amendment will go through the same route as a simple law.

“It is just like when you want to vote to impeach a Speaker or Senate President, it is two-thirds of those present that do so. We have used that to elect heads of legislature and used that to remove them several times in this country. So same is applicable in this case.

“In simple terms, if we have 60 senators in attendance that day, it means we require 40 votes.”
Meanwhile, Justice Ahmed Mohammed of the Federal High Court, Abuja, Monday reserved judgment in a suit challenging the powers of the National Assembly to override Buhari’s veto on the Electoral (Amendment) Bill, till April 25
Justice Mohammed gave the date after counsel to the parties in the suit adopted and argued their written addresses.
The plaintiff, Accord Party, had dragged the National Assembly, Attorney General of the Federation, (AGF) and INEC to court, after Buhari refused to assent to the Electoral Bill.

The party had expressed concern that the legislature could override the presidential veto and pass the bill to law.
At the resumed hearing Monday, counsel to the plaintiff, Wole Olanipekun (SAN), urged the court to answer in the affirmative questions raised in the plaintiff’s originating summons and grant all the reliefs sought.
Olanipekun, in arguing the plaintiff’s brief, submitted that the order of election, as proposed in the Election Amendment Bill, 2018, was virtually impossible and impracticable, when taken into consideration INEC’s powers to postpone elections it is constitutionally empowered to conduct.

Also reacting to the notice of the preliminary objection brought by the first defendant (National Assembly) challenging the jurisdiction of the court to entertain the suit in the first instance, Olanipekun submitted that there was no model anywhere in the world that takes away the powers of the court from adjudicating on any matter.
He therefore urged the court to dismiss the preliminary objection raised by the first defendant and grant the relief sought by his client.

Responding, counsel to the National Assembly, Joseph Daudu (SAN), informed the court of the notice of preliminary objection he had filed on March 23 challenging the jurisdiction of the court to hear the matter.
Daudu said the court should first determine whether the originating summons in its entirety was justiciable.
According to him, issues of the internal affairs of political parties are not justiciable, including the internal workings of the National Assembly.

He said if the court was inclined to uphold his preliminary objection, then there would be no need to continue with the plaintiff’s originating summons, as it would amount to a waste of the court’s time.
The first respondent further urged the court to dismiss the suit on the grounds that the plaintiff lacked the legal right to file the suit, since it failed to present its certificate of registration as a political party registered with INEC.

While urging the court to uphold his preliminary objection and dismiss the suit, Daudu further asked the court to discountenance the argument of the second (AGF) and third (INEC) defendants, noting that though they are defendants in the suit, their position was supportive to the case of the plaintiff.
Responding, the second defendant, the AGF, Abubakar Malami (SAN), aligned himself with the position of the plaintiff.
Responding to the issue of whether the court has jurisdiction to hear the matter, the AGF submitted that once a bill is passed by the two chambers of the National Assembly, the legislature has concluded its job and from that point the court has jurisdiction.

Similarly, counsel to the third defendant (INEC) Femi Falana (SAN), who also aligned with the position of the plaintiff, argued that whether the bill has been passed or was still pending at the National Assembly does not stop the court from hearing the matter.
He also presented exhibits showing that the plaintiff was duly registered with INEC as a political party and as such had the legal right to file the suit.
Falana, like Malami, urged the court to resolve the matter in favour of the plaintiff and grant all the reliefs sought.

After listening to the submissions of the counsel in the matter, the judge reserved judgment till April 25.
In the originating summons marked FHC/ABJ/CS/232/2018, the plaintiff is seeking an order of perpetual injunction restraining: “The President of the Federal Republic of Nigeria, represented by the second defendant, from assenting to the Electoral Act Amendment Bill, 2018, as passed by the first defendant.
“The first defendant from passing into law, by a two-third majority, or any majority at all of the said bill as already passed by it.”