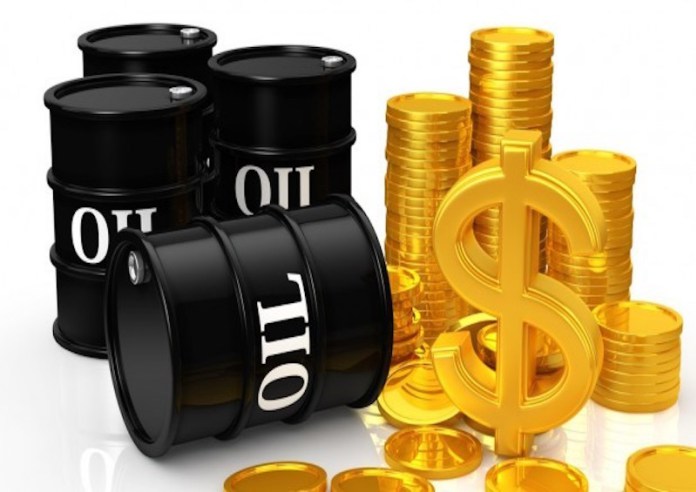 Crude oil prices slipped slightly on Monday but a rebound in stock market and the escalating Saudi Arabia – Iran tensions capped the losses and supported Brent crude futures at over $70 per barrel.

The market also found support from rising Middle East tensions.
Reuters reported that Saudi air defences shot down seven ballistic missiles fired by Yemen’s Iran-aligned Houthi militia on Sunday, some of which targeted Saudi capital Riyadh.
Beyond trade concerns, crude was pressured by a rise in the number of active US oil rigs to a three-year high of 804, implying further rises in production.

US oil output has already jumped by a quarter since mid-2016 to 10.4 million barrels per day (bpd).
The price of Brent hit $71 per barrel in the middle of January, despite surging production by the United States, which is offset by the production cuts led by the Organisation of Petroleum Exporting Countries (OPEC) and Russia.
After falling from an all-time high of $147 per barrel in July 2008, Brent crude price had hit a peak of $115 per barrel in June 2014 before the excess inventory in the oil market forced the price down to $27 per barrel in February 2016.

WTI also reached a peak of $105 per barrel in June 2014 before the sharp drop in oil prices.
However, a production-cutting pact between the OPEC, Russia and other producers has given a strong tailwind to oil prices, with both benchmarks hitting levels not seen since December 2014.
OPEC, together with Russia and a group of other producers, last November extended an output-cutting deal to cover all of 2018.

The cartel had at their November 30, 2017 meeting agreed to extend oil output cuts until the end of 2018 as part of the global efforts to eliminate excess oil supply that had dogged oil prices in the markets since 2014.
The current deal, under which OPEC and non-OPEC producers are cutting supply by about 1.8 million barrels per day, expires in March 2018.

The decision to extend the production cuts has seen crude oil prices rising, but a major factor countering efforts by OPEC and Russia is US oil production which has soared and is fast approaching 10 million bpd.
A number of analysts have warned that the 13 per cent rally since the start of 2018 could peter out in the short term due to global refinery maintenance, which could limit crude demand and rising North American production.
With oil prices above $60, Russia had earlier before the extension of the output cuts, expressed concern that an extension for the whole of 2018 could prompt a spike in crude production in the US, which is not participating in the deal.

Russia needs much lower oil prices to balance its budget than OPEC’s leader Saudi Arabia, which is preparing a stock market listing for national energy giant Aramco this year and would hence benefit from pricier crude.
However, some in the producers’ group fear current price gains could prompt shale companies to flood the market.